COP27: Historic Success or A Failure

COP27: Historic Success or A Failure

The approval for the creation of a "Loss and Damage Fund" — in the face of severe opposition from EU and the US — is a big victory for developing countries.

The UN Climate Summit, known as COP27, concluded on Sunday, 20th November 2022, amidst the historic decision to set up a “Loss and Damage Fund”.

The decision has generated positive responses from vulnerable and developing countries as they lauded outcomes in this year’s COP. However, several countries were disappointed with the non-ambitious approach towards emissions reduction.

In this article, the author will deliberate on the outcomes of the COP27, held in Egypt and what it offered for the climate.

The approval for the creation of a loss and damage fund — in the face of severe opposition from EU and the US — is a big victory for developing countries.

According to Reuters, “The deal for a loss and damage fund marked a diplomatic coup for small islands and other vulnerable nations in winning over the 27-nation EU and the United States.”

For many experts, the loss and damage fund is the sole good outcome of the UN climate summit.

“The creation of a loss and damage fund, a key demand of the developing countries, was the lone bright spot in the final outcome of COP27…” writes the Indian Express.

But What is Loss and Damage?

As previously written by the author, historically, western nations have contributed immensely to CO2 emissions since the beginning of the industrial revolution. Since then, climate change has severely affected the world, inducing disasters such as forest fires, heatwaves, floods, etc.

The concept of Loss and Damage is that the developed countries should pay for the climate disasters in poorer and developing countries. The recent floods in Pakistan once again reaffirmed these claims of developing nations — which were highly raised in the recently concluded COP27. 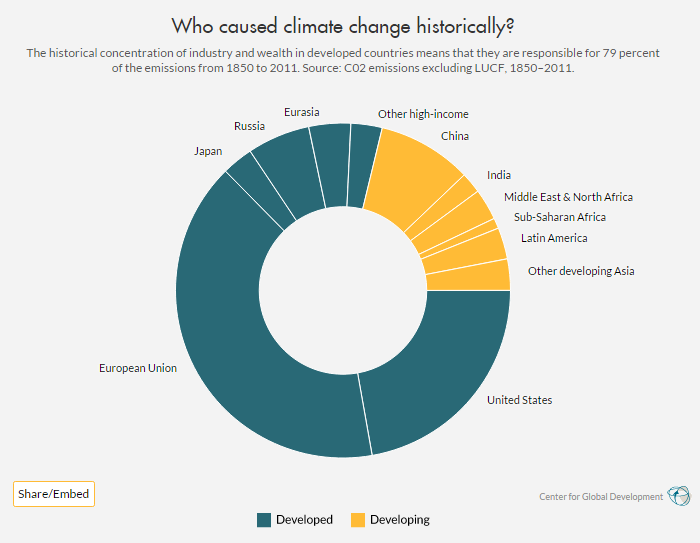 The demands of creating a ‘loss and damage fund’ had always been met with resistance from the developed countries. The resistance originated from the fear that such a fund could open them to legal liability for historic emissions.

During the talks, several countries such as Pakistan had pleaded for the creation of the fund, citing the recent climate change-induced floods in its country.

Despite being the standout success of the talks, hammering out the details of how the fund will be run, such as how the money will be distributed and which countries are likely to be eligible, will likely take several years. Still, it will pave the way for new, rekindled trust between the vulnerable and developing countries — only if the rich nations decide to pay.

The presence of over 600 fossil fuel lobbyists — was one of the many things which stood out during the climate summit negotiations. Though no one can truly understand whether the presence of Oil company CEOs influenced the final agreement.

The final agreement is being criticised by experts as nothing in the agreement could lead to greater action on emissions reductions or mobilise more financial or technological resources to combat climate change. A proposal to possibly phase down all fossil fuels — suggested by India during the climate summit — did not make it up in the final agreement.

The deal also included a reference to “low-emissions energy,” raising concerns that it opened the door to the growing use of natural gas – a fossil fuel that leads to both CO2 and methane emissions.

In a recent report, we mentioned how several African nations had arrived at the climate summit to negotiate opportunities for them to explore rich gas reserves — which could elevate their economies to soaring heights.

The anti-fossil fuel wagon was also disrupted after the recent natural gas crunch caused by the Ukraine-Russia War.

One of the major disappointments has been the lack of progress in increasing financial flows to address climate change.

What is Climate Financing?

As per the United Nations Framework Convention on Climate Change (UNFCCC) Standing Committee on Finance, “climate finance refers to local, national or transnational financing…that seeks to support mitigation and adaptation actions that will address climate change”.

Simply, it is the transfer of public resources from developed to developing countries, in light of their UN Climate Convention obligations to provide ‘new and additional financial resources’. Climate finance is required for mitigation because large-scale investments are required to significantly reduce emissions.

According to research released during the COP27, 4 trillion US Dollars are required annually as investments in the renewable energy sector till 2030 to reach net-zero targets. In the pre-2030 period, developing countries will require approximately 5.6 trillion US Dollars to implement their climate action plans.

Though at the concluding hours, its spotlight dimmed by the G20 summit in Bali, the COP27 still managed to see several nation heads create an impression on the global forum.

For many, Brazil’s president-elect Luiz Ignacio Lula Da Silva was the show stealer or “the undoubted darling of the COP” as the BBC would like everyone to believe. Although, he seems more of a darling of the central and left, even more than Joe Biden.

Narendra Modi’s absence was missed at the climate summit although India stood out with its call to phase down all fossil fuels.

The Way Ahead on Climate

A mixed bag — the phrase which aptly sums up the COP27 in Egypt.

Despite the criticism of not doing much, COP27 is now etched into history as the summit which took the historic decision on loss and damage. The developing countries have full right to vent their frustrations about the non-sufficient result of the climate summit but they should remember that it is partly their fault too.

The repeated failures of developed countries to honour their climate financing pledges are a major reason why developing nations are not ready to give up on their fossil fuels. The COP27 has demonstrated that developing and poor nations want to save the climate and work towards it but they want cooperation from rich nations and time until they can fully transition from fossil fuels to renewable and clean sources of energy.