Goa, Beyond The Beaches

Goa, Beyond The Beaches

Goa remained a union territory for a long time. Only in the late eighties was it granted a full-fledged statehood, resulting from Konkani language agitation

Goa is not just about its pristine beaches and nightlife but a state with a complex array of politics. Starting as a Portuguese colony, then a Union Territory after its liberation in 1961and subsequently turning into a state in the late eighties, Goa has come a long way.

Goa remained a union territory for a long time. Only in the late eighties was it granted a full-fledged statehood, resulting from Konkani language agitation. The Twelfth Amendment Act of 1962 incorporated Goa, Daman and Diu into the Indian Union. The Act also allowed for the territory’s representation in Parliament.

The fact that numerous administrative and economic challenges accompanied greater political freedom was “an irony of post-liberated Goa.” The demand for the merger with Maharashtra was never public until Goa’s independence. But, it came up as a primary election issue in 1963, when those backing a merger came up with the Maharashtrawadi Gomantak Party (MGP), whose goal was to incorporate Goa into the state of Maharashtra. The MGP was of the firm opinion that as Konkani was a Marathi dialect, Goans have their mother tongue in Marathi.

To counter pro merger narrative, the United Goans Party (UG) came up as a response by the predominantly Konkani-speaking Christian minority that had previously ruled the province under the Portuguese to prevent the blurring of their community’s distinctive culture.

Despite having little historical presence in Goa, the Congress party nonetheless anticipated leveraging on the post-liberation sentiment as it had done across British India. Like other parts of the country, Congress too has weakened in Goa enormously. Very recently, a bulk of Congress switched their sides to BJP, amply leaving that the grand old party has little future in the state.

Goa’s Electoral Politics and its Ramifications

The first general elections in Goa in 1963 were a keenly fought battle between various groups. It, however, proved a debacle for Congress. A coalition between the MGP and the Praja Socialist Party was created by disgruntled members of Congress, who were either excluded or advocates of the merger. The Congress’ ticketing criteria were a catastrophe since they allowed caste and communal divisions to be battled in Goa’s first democratic election.

The “lion” associated with Shivaji served as the MGP’s electoral symbol, whereas the “hand” linked with St. Francis Xavier served as the UG’s sign. The MGP was able to rally both anti-Brahmin and anti-Catholic emotions. With the help of a sizable Hindu majority, the MGP and its allies could win 16 Assembly seats and two parliamentary seats. The Christian community came together behind the United Goans in response to what they saw as a threat to Goa’s unique identity. The UG won 12 Assembly seats, with the majority of its support coming from the Old Conquests, which had converted to a Portuguese colony.

Diu sent back an independent, while the only Congressman elected to the territorial legislature was from the Daman. Because of their sectarian nature, the Goa elections of 1963 were referred to as “the most serious electoral debacle” the Congress Party had ever experienced. The result notably “pained” Prime Minister JN Nehru. However, a national political party that prioritised economic matters and relied on appearances by central members as a stand-in for widespread appeal had no place in Goa until the merger issue was settled. Thus the communal approach continued for a decade in Goa. A resolution was passed in the Goa Assembly demanding full statehood in 1976. Goa finally became a state on May 30 1987. Daman and Diu were separated and made a UT.

The High Court of Bombay became the common High Court for the states of Maharashtra and Goa and the Union Territories of Dadra & Nagar Haveli and Daman & Diu after the passing of the Goa, Daman & Diu Reorganization Act, 1987 by the Parliament.

Looking at the recent 2022 assembly elections in Goa saw a multi-cornered contest. While the TMC teamed up with the Maharashtrawadi Gomantak Party, the Congress party ran for office in alliance with the Goa Forward Party (GFP). While the Arvind Kejriwal-led AAP contested on its own, the Shiv Sena and the Nationalist Congress Party also forged a pre-election coalition. The BJP also contested on its own in the elections. Along with 68 independent candidates, other groups competing were The Revolutionary Goans, Goencho Swabhimaan Party, Jai Mahabharat Party, and Sambhaji Brigade.

Because of the state’s political unpredictability in the years after its statehood in 1987, personality-based politics grew more prevalent in Goa, with individual leaders utilising tactics to advance their own interests. Speaking to The Print before the election polls, the BJP’s Pramod Sawant, noted that “This time, we are asking the people of Goa to give their vote for a party to form the government, and not just for the MLA”.

The Goa Congress publicly vowed not to accept defectors in this election. Meanwhile, the Aam Aadmi Party in Goa required its candidates to submit affidavits promising not to accept bribes or defect. However, both parties conducted targeted inductions in the spur of the election, bringing in defectors from other parties.

With 20 assembly seats, the BJP emerged as the single-largest party winning the elections. With a slim margin of 600 votes, the incumbent Chief Minister Pramod Sawant, who had been lagging earlier, defeated Congressman Dharmesh Saglani to win the Sanquelim Assembly seat. Maharashtrawadi Gomantak Party (MGP) and independent candidates came forward to support the formation of the government. Congress, meanwhile, won 9 seats in the assembly. TMC, led by Mamata Banerjee, performed poorly and failed to win any seats, while the Aam Aadmi Party managed to clinch two seats. While some BJP officials ran as independent candidates, many famous Congress defectors ran on BJP tickets.

On March 29, Pramod Sawant took the oath of office as Goa’s 14th chief minister. This is Sawant’s second consecutive term as chief minister. He has held the position since 2019. After the ceremony, he declared, “I am not an accidental chief minister. I am elected and not selected,” Eight additional BJP MLAs were sworn in as cabinet ministers at the ceremony on Monday. Five additional politicians have pledged their support for the BJP administration, including two MGP legislators (Jit Arolkar in Mandrem and Ramkrishna “Sudin” Dhavalikar in Marcaim) and three independents (Chandrakant Shetye in Bicholim, Antonio Vas in Cortalim, and Alexio Reginaldo Lourenco in Curtorim). 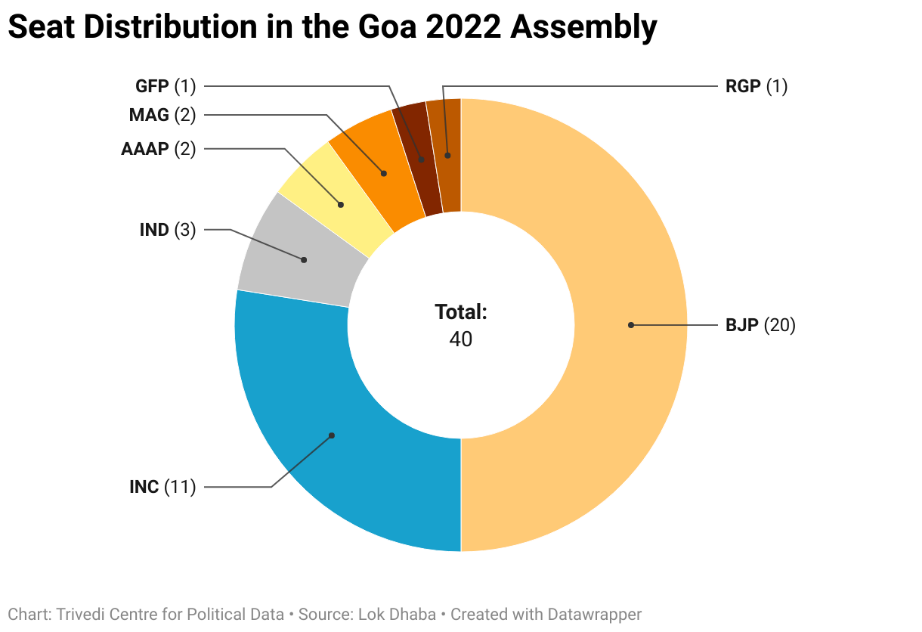 Clear evidence of erosion is when the party losing cadres are unable to recruit them in the same measure from another party, as was the case with one-fourths of the Congressmen joining BJP. As many as 8 Congress MLAs from Goa joined the Bhartiya Janata Party (BJP) on September 14, 2022, throwing a severe blow to the Congress party. Former Congress MLA Michael Lobo declared, “We have merged with BJP with a majority of 2/3rd to strengthen the hands of PM Modi and CM Pramod Sawant.” Given that it failed to garner a larger proportion of the vote than it did five years ago, the Aam Aadmi Party’s debut into Goa politics appears to be more of an accident of events. An enthusiastic campaign by the Trinamool Congress fizzled out and failed to yield notable results.

While addressing a crowd at Mapusa, Prime Minister Narendra Modi stated, “Goa is useful for India and can come in handy in the country’s progress. If we have to increase tourism in India, it can be done from Goa. But such things did not cross the minds of the previous governments. They ruled for five decades in Delhi. They remembered Goa only when they wanted to pay a visit here for tourism purposes.”

Perhaps this explains why Goa is a state with many narratives. It is important to note that despite the turbulent political and economic conditions, Goa has evolved into a self-sufficient state over the past few years under good governance.

Goa indeed guides other states in terms of the promotion of tourism. The tourism and hospitality sector, in particular in Goa is one of the best in the country. Good governance has become a benchmark of politics courtesy BJP. Late Goa CM and tall BJP leader Manohar Parrikar took the state to new highs in governance, and the incumbent CM Pramod Sawant is certainly taking forward his legacy.